Article of the week: The best acoustic guitar amplifiers

6 reasons guitar frets buzz (and how to stop it)

0
SHARES
ShareTweet
Contents hide
1 Fret Buzz – It’s a frustrating norm for many guitarists!
1.1 Why do guitar frets buzz?
1.2 Is the buzzing sound going to be permanent?
1.3 Is this something I can fix or is it a job for a professional?
2 Six of the most common causes of fret buzz
2.1 1. Your guitar setup is poor, and needs to be addressed
2.2 2. You’re playing too darn hard!
2.3 3. Your action is way too low
2.4 4. The truss rod needs a closer look
2.5 5. Your frets have seen better days
2.6 6. Your nut is a little…nutty?
3 Fixing fret buzz – Video versions
4 Tools for fixing fret buzz
5 Conclusion

Fret Buzz – It’s a frustrating norm for many guitarists!

But, exactly what is it and how can you stop it? In this breakdown we’re going to look at six common causes, along with ways that you can either fix the issue yourself or brief a guitar tech at your local music store to sort that pesky buzz out for you.

Why do guitar frets buzz?

A buzzing fret can be caused by many different guitar issues. The actual reason why a fret buzzes is because the string itself is either buzzing or 'hitting' the fret itself, so as the player strikes the string it comes into contact, in some degree or another, with the fret.
A guitar with a poor action and overall setup is the most common cause, with poor playing technique following closely behind. This is why it's important to play a guitar in person before purchasing, ensuring you can play to the neck width, body size and setup prior to purchase.

Is the buzzing sound going to be permanent?

No. Some causes of buzzing may be more difficult to fix than others, but it's rare that buzzing is indicative of an issue that has to be dealt with permanently (essentially rendering the guitar to be unplayable).

Is this something I can fix or is it a job for a professional?

A lot of the common issues can be solved by any guitarist with limited knowledge when it comes to sorting guitar issues. Having said that, I would always recommend you go to a professional that is reputable if you're getting a full setup. Take it from me, I've had so-called guitar tech specialists make fret buzzing neck issues in particular worse than when I took the guitar to the store in the first place. Do your research!

Six of the most common causes of fret buzz

This is by no means an exhaustive list. Rather, it’s some of the more common issues I’ve encountered and also many of those that players in the wider guitarist communities have come across when I put the question of ‘what caused your guitar to buzz?’ out to a wider audience.

1. Your guitar setup is poor, and needs to be addressed

In my personal experience, a lot of the fret buzz I’ve encountered has been from new or new-ish guitars that simply haven’t been set up properly. Generally, if a guitar technician has been lazy in the final processes prior to putting your guitar to market, there may be simple steps that have been missed that could lead to a buzzing fret.

The issue is that if the guitar has not been setup properly in the beginning, then there could be more than one issue causing the problem, which is then naturally much harder for a bedroom guitarist with no prior setup knowledge to pinpoint and resolve. You could also see other issues like the guitar frequently going out of tune or lower action within certain areas of the neck.

A properly setup guitar from the outset can also identify any potential manufacturer issues, and also resolve any instances of fret buzz or other problems before it makes its way to your eager hands!

Take a look at the rest of this list of potential causes. If you’re seeing more than one on your guitar, get it booked in for a setup as soon as possible.

Solution: Make sure that you play the actual guitar you’re going to be purchasing before buying, and that it is the actual guitar you’ll be taking home (and not one from the dusty warehouse in the back of the store). If you’ve tried other simple fixes that haven’t helped, then take your guitar for a full setup with a reputable technician.

No guitar setup or perfectly-placed action is good enough to combat a sloppy playing technique. If you’re either striking the strings too hard with your plectrum, or placing too much pressure with your fretting hand, you could be causing a fret buzz without even knowing it.

Commonly, beginners will also aim for the fret directly with their fingers rather than the gap between the frets. As you can imagine direct pressure to the fret will also cause a buzz, each and every time. That is, unless you’re playing with natural harmonics, but that’s an article for another day…

Solution: Reevaluate the intensity of your playing. Could it be that your strings are too light and your technique doesn’t lend itself to a lighter gauge? Is your plectrum way too thick for your playing style, leading to aggressive picking that is pressing the strings down against the frets directly? Record a video of your playing, slow it down, and take a close look at that overactive picking hand!

3. Your action is way too low

The ideal guitar action is 1.6mm, which is the distance between the fretboard and the strings from the 12th fret (the most common point of measurement for looking at action depth).

With a lower action, your string simply sit closer to the neck, and naturally when they are then fretted the likelihood that you’ll be hitting the frets directly (or that the string will ‘roll’ based on action height into the fret) is a lot higher.

If your action is too high, you could be over-compensating in fretting hand intensity, which could then also lead to buzzing fret as you’re pushing the string far too hard against the fretboard.

Solution: Take a ruler from the neck against the 12th fret. Is the gap between the strings and the neck at the 12th fret either lower or higher than 1.6mm? You can either adjust the action yourself or take your guitar for a setup if you want to get a professional to take a look at it.

This is definitely one for a pro, or if you’re going to try this yourself I seriously recommend taking a further look at tutorials and understanding the implications to your neck if you get truss rod manipulation wrong.

The truss rod sits internally within the neck of the guitar. Its job is to stabilize the amount of curvature in the neck, however too little of a ‘bow’ in the neck can mean that your strings do not have enough room to emit a full sound and cause a buzz. The truss rod can also affect the action and overall playability of the guitar, so if you suspect a truss rod of causing multiple problems then I’d say to definitely get a guitar tech to take a closer look.

Solution: Adjusting a truss rod can be both a simple and a difficult task. Rather than telling you how to solve the truss rod problem, I would suggest that if you’re not 100% comfortable and don’t already know how to do it, you need to take your guitar to someone who does. Fret buzzing from something like a faulty truss rod could be the least of your worries, so better to get the neck checked over in its entirety.

5. Your frets have seen better days

This is a more common issue with older guitars, and is a very common issue if frets have experienced persistent playing with wear and tear over a sustained period of time (usually years and even decades).

A set of frets that are worn down will provide little to no support for the player, either causing a buzz within a certain location on the neck, directly over a fret, or if the fretboard is completely obliterated then the entirety of the neck.

Solution: So, how do you actually address frets that have seen better days? You can take your frets to be ‘dressed’ by a technician or, more specifically, a luthier who can strip out the faded frets and put some brand new ones in. If a singular fret is cracked or needs to be replaced then this can be addressed with a fret dressing too.

6. Your nut is a little…nutty?

The nut of your guitar is hardly going to be the place that gets a lot of your attention, so a nut that is out of whack may not be spotted until it starts to cause issues like fret buzz. The buzzing in this instance can be caused by a nut that is too deep for the strings that are on the guitar, or a groove that is too low and causing a decreased action. Essentially, if the nut isn’t supporting your strings the way it should, then you’re highly likely to encounter buzzing at one part of the neck or another.

Solution: Take your strings off and clean the nut. Is it cracked, full of dust, or can you see certain grooves sitting lower than others when you put the strings back? You can either replace the nut directly or take it to a luthier who can assess whether you need a fret dressing or truss rod adjustment alongside the nut issues.

With something like a fret buzz issue, it can often be easier to learn visually rather than follow some tricky steps in a guide. Check out these videos which have personally helped me to source and stop fret buzz at the root of the issue:

If you really want to get serious about addressing fret buzz from not only in your current setup but also every guitar after that, tools such as the ones below can help to speed up the process in the future: 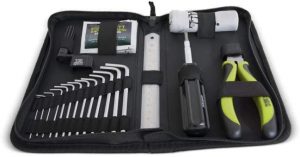 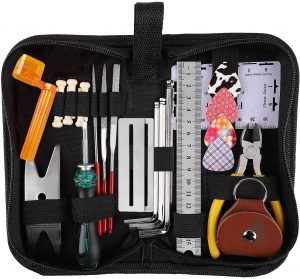 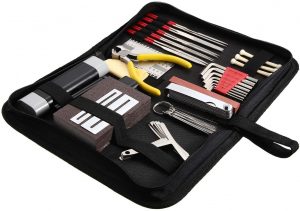 To summarise this guide, it’s pretty fair to say that a buzzing can either be a minor fix, or an indication of a larger problem. If it any stage you’re thinking that you’re in over your head when it comes to addressing a buzz, take your guitar down to a technician or luthier you can trust in order to get an opinion (and proper fix) from a professional. 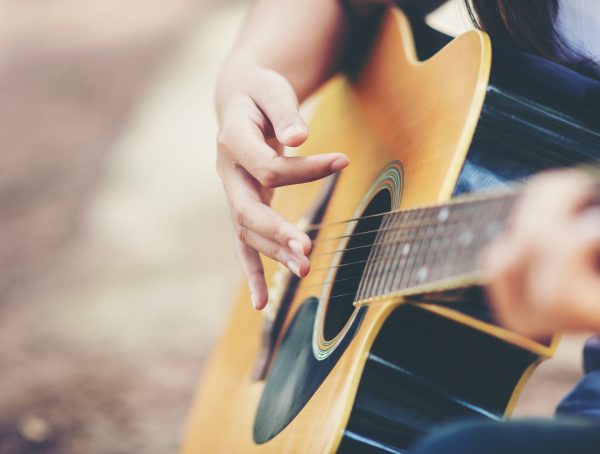 Choosing your first guitar can be a daunting process. It can be difficult to decide where to start in terms … 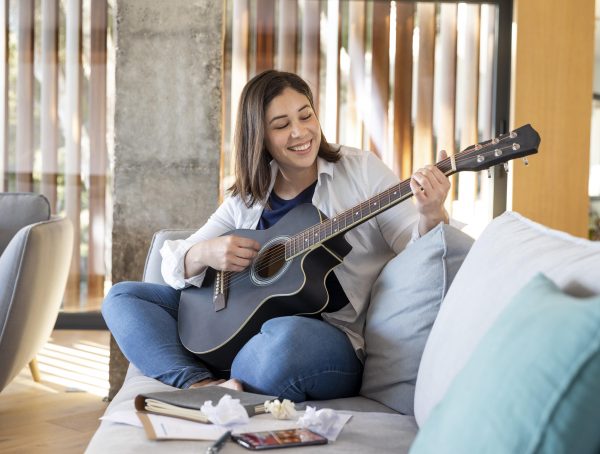 Can you teach yourself the guitar effectively?

To answer the question quickly - yes, you absolutely can. While a guitar teacher may be helpful for some people, …

Do you need to read music to play the guitar?

No, you don’t. Reading music can be a tough skill to master and it’s something that doesn’t come easily. When …